How To Build Your Future With Ideas – Sam Adeyemi

Recently, Sam Adeyemi, a Leadership Coach and the Founder of Daystar Christian Centre, Lagos felt the heat of the social media on his arguments that Mental Illness has its root cause as Sin. In this article, he writes about building a future with ideas. 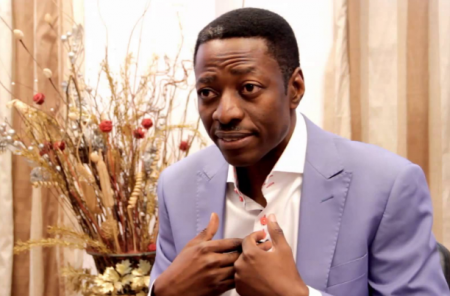 ---
Introduction
Before creation, this whole world and the people in it were just an impression on God’s mind. Everything was sleeping quietly in an idea. A great future awaits all of us, however this future is waiting for the idea that God wants to transfer into our minds. Our future is sleeping quietly inside these ideas.

Ideas rule the world
Ideas are simply thoughts, plans, or mental impressions on the mind. They are more powerful than we may understand. It may also be encouraging for us to know that God did not finish creation, but only started it. He did not turn into physical reality all of the things that were real in His mind. He gave man the privilege to help Him translate it into physical reality. The rest of creation is waiting for us. God wants us to be co-creators with him.

Creation begins with an idea. Since we are built in God’s own image. He made us with the ability to produce ideas and the capacity to turn them into physical reality. Ideas are more powerful than the brains that produce them because they usually outlive those brains. Everything visible today, for example, cars, clothes, buildings, computers, etc., first of all existed in the form of an idea in someone’s mind.

Every human being is potentially wealthy and prosperous. The poor person is the one who does not have ideas because ideas are the seeds that guarantee a future harvest. A mango seed is planted and it grows into a tree.

One major way through which the devil can get people to become poor is to make them have an idea problem. An idea problem is a serious problem. If people can get ideas, God says they will get the material equivalent of those ideas. I have found out that money flows in the direction of ideas. Whatever stops you from getting an idea has already stopped you from getting money.

You can never rise above the level of your idea. The quality of idea that flows through your mind determines the quality of your life. Every technological breakthrough is built on the foundation of ideas. The Coca-cola story is a proof that nobody has money problem but an idea problem.

Ideas magnetize resources. Once you act on an idea, it carries on with a power of its own just like seeds begin to grow once they are sown. God has put the power to grow in every seed. There is nothing a farmer can do to grow a seed. Seeds draw on the environment to develop into maturity.

Our brain has been designed to produce ideas that suit our decision. Ideas follow decision. To say, I do not know how to get it shuts down the brain. Just decide what you want & when you want to get it. Once that is settled, the brain supplies the “how” and the “how” responds to decision.

Ideas are spiritual seeds. Practically, every experience that a man has can be described as a fruit. The average man eats the fruits and throws the seeds away. The fleshy part of a fruit can be likened to our experience; and inside every experience is a seed and the seed represents the principle that controls the experience. If you eat a fruit and throw the seed away, you cannot produce the fruit again, but if you keep the seed you can produce the fruit as many times as you want. This is why ideas are powerful. Our destiny is tied to what you do with all the seeds around you. The more you work with your seeds, the greater your dominion.

Every idea, like a seed, has a divine time to grow to maturity. The moment a maize seed is sown, it begins to grow and mature in ninety days; however the man who sows cocoa seeds know that it will take years for it to mature, therefore different kinds of ideas have different maturity periods. The moment you catch an idea your future success is guaranteed; because people with seeds have a harvest waiting for them in the future.

How to generate Ideas

A sage once said there is something more powerful than the armies of this world put together, and that is the idea whose time has come. By God’s timing, this is the moment for some powerful ideas to break into the natural realm. At least one is designed to come through you. Act now; it’s your turn to succeed.

–
Sam Adeyemi is a Leadership Coach and the Founder of Daystar Christian Centre, Lagos. This reproduced article was originally published on Linkedin which can be found here.