A 23-year-old fashion designer, who was arrested while fleeing from a robbery scene, yesterday said he only accompanied his friend to the operation.

The suspect, identified as Adeshina Adeyemi, confessed to have accompanied his friend whom he identified simply as Chibuzo, to operate at a building behind his, in Adeniran Ajao Estate, Maryland, at the weekend.

The choice of their victim, according to him, was given by Chibuzo because he (victim) was considered rich. The duo set out for the operation around 11:30p.m. and scaled through the fence of the building.


He said: “When we got to the building that night, I wore a hood to cover my face in order not to be identified because it is my territory. We entered through the kitchen window and made straight for the sitting room. My friend collected an iPad he saw in the sitting room.

“As we were contemplating on which of the bedrooms to go into, a lady came out and raised the alarm on sighting us. This was followed by an alarm bell, which vibrated in the vicinity. At that point we fled in different directions.

“I jumped through the fence into our building, forgetting to remove my hood. Our gateman, who sighted me, ran after me and caught me. He collected the axe I went with and held me until other guards came around. By the time they removed the hood, they discovered that I was the one.

“I have brought shame to my family members. This is the first time I would be involved in a mess like this. I went with my friend, who was in dire need of money. He has been complaining bitterly about the need, that at a point he said the only solution would be to go and rob. He begged me to go with him and also promised to share whatever we get there.

“The plan was to tie occupants of the building down and collect all their cash, phones and other valuables. I was with an axe while Chibuzo was with a cutlass. We went with weapons to defend ourselves. But fear made us take to our heels when the alarm was raised because we are not professionals. The most painful aspect of it is that Chibuzo whom I followed out of pity, escaped while I am left to pay the price.” 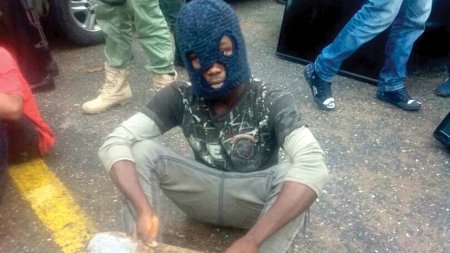 Jul 23, 2021
Chinedu Iroka
C
E
Metro My family and I are with the Ekweremadus" Peter Obi prays for "justice to be done" as he reacts to the arrest of Ike Ekweremadu over alleged organ....

Jun 24, 2022
ese
E
E
Entertainment I lost my shame the day Nigeria accused me of being a homosexual - Cross-dresser, James Brown, speaks on why he isn't ashamed of acting like a female

Jul 10, 2022
ese
E
E
Metro Boma and I didn't have sex but it was wrong as a married woman to be kissing - Tega apologizes for her behaviour in the Big Brother Naija reality show