Sports I never imagined I could score 400 goals - Lionel Messi

Lionel Messi has expressed his delight on scoring his 400th career goal this past weekend.

Messi over the weekend notched up a career high 400 goals,netting two goals in Barcelona's 6-0 thumping of Granada.

The 27-year old Argentine said that he never thought that he would achieve such milestone in his career.

"I never imagined I could achieve anything like this in my career," said Messi on his official Facebook page.

Barcelona coach Luis Enrique has reserved some praise for Messi,saying that it was remarkable.

"It's like Messi was touched by a magic wand," said Enrique.

"I don't think if we added together the goals we have scored on the playground it would reach 400," Enrique added. 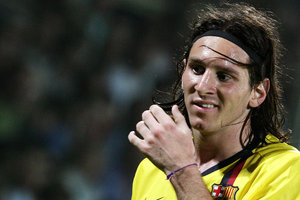 Sports The reason why Messi is on 399 league goals and not 400 – MARCA.com

Sports I never expected to have so much success, Messi says – Premium Times Nigeria