The Independent Corrupt Practices and Other Related Offences Commission (ICPC) on Thursday said it never reported that some States diverted bailout funds.

The Chairman of the ICPC, Mr Ekpo Eta, told Channels Television that the report was given different interpretations by different media houses and individuals.

“Those original publications we released were interpreted in various ways by different media houses and I must say that quite a number did not state clearly what we had spelt out. Most of them added what they thought was what should have happened.

“We had never at any time said that bailout funds were diverted, as it was widely published.

“If you go through the main report, we stated as it was. In some state, the funds were requested for and allotted but they were not used for the purpose. 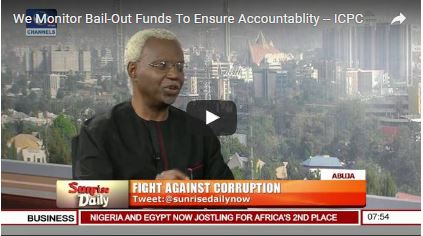 Mr Eta stated that the intention of the bailout monitoring was not to run down states, but “it was a governance tool to help them in terms of placement of funds that they have collected”.

“Like I have heard now, some have seen it as something to help bridge the budget but you must explain at every steps what you are doing.

“We saw some payments that were made into some bank accounts. When we requested for details of the transaction, we were told it was used in paying footballers salaries that we had owed for two months,” he explained.