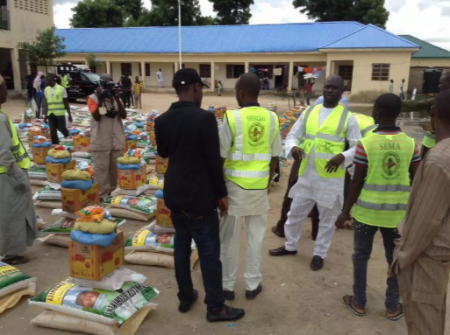 The official identified as Satomi Mohammed was allegedly intercepted along with three other IDPs whose names were given as Mala Abdullahi, Mangus and Abdullahi Ali when they were allegedly loading fifty bags of 50 kilogram sacks of rice into a waiting SEMA truck with a view to taking it out of the camp.

An IDP who said he was part of the group that made the arrest, said, “We have been lacking food in this camp housing IDPs from over seven local governments because officials in the camp collaborate with the security agencies at the gate to steal the food. Just last month, the same officer, Satomi Saleh carted away 70 bags of rice. We could not stop him because we were not many. This time when we realized that he had moved 50 bags of rice to an isolated area, we decided to lay ambush. When he came to cart the rice away in a truck, we intercepted him and handed him over to operatives of the Department of State Services (DSS) because all other security personnel in the camp have betrayed us in the past.”

Few hours after the arrest of the four suspects, armed plain cloth security men believed to be handling the investigation returned to the camp with a list of other culprits supposedly mentioned by the first four for further arrest and interrogation.