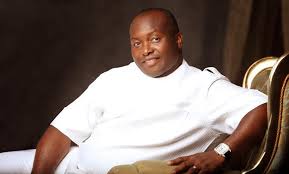 Nigerian Professional Football League side, FC Ifeanyiubah have expressed intentions to snatch up Ajani Ibrahim and Sunday Adeniji from Shooting Stars of Ibadan.

Both players have been in top performance for the Oluyole Warriors since the arrival of coach Gbenga Ogunbote.

A very reliable source stated that the deal may happen sooner than later as moves to get the players have been launched by the Nnewi side after they shone in their game against Heartland at Rojenny Stadium, Oba, near Onitsha, at the weekend.

“It is very clear that our oga, Ifeanyi Ubah, did not hide his love for the two players after watching them perform and he has started making inquiries on how to get them to join our club,” a source told AfricanFootball.com

"So, I am sure that before long, Sunday Adetunji and Ajani Ibrahim will be unveiled as F.C IfeanyiUbah players.”

Our source further said that former Rangers, Enyimba and 3SC forward Mishack Chibuikem has already joined the Nnewi side as they look to discover the form that made the team a front runner in the early stages of the season. AfricanFootball