Curators
National president of Ijaw Youth Council, IYC, Mr. Udengs Eradiri, who RNDA listed his name among the operatives of Niger Delta Avengers has reacted to the allegation saying he is not involved in the activities of the group. 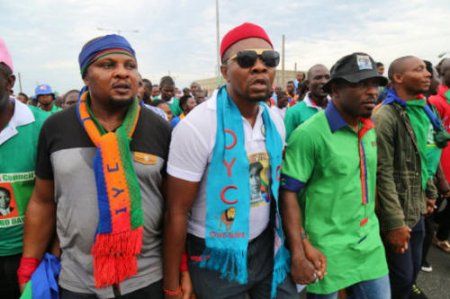 As reported by Vanguard, Eradiri claimed he has ‘no business whatsoever with the Niger Delta Avengers.’

“Since the splinter group of the Niger Delta Avengers said they have broken away and repented from their old ways, I call on them to come out in open and identify themselves openly, instead of still using pseudo names such as Cynthia Whyte to issue statements.

“Any discerning mind would know that the said statement purportedly naming sponsors of Avengers was issued by the promoters of the Aaron 2 MEND negotiation with the federal government. Their grouse against me is because I said in my recent interviews that MEND Aaron 2 team does have the mandate of the Ijaw and other Niger Delta people to negotiate with the federal government.

“They are desperate because of the lack of credibility in what they are doing,” he said. Eradiri asserted: “I wish to state that no amount of desperation and blackmail would stop me from stating the position of the Ijaw people as far issues affecting the Niger Delta region are concerned. I was elected to promote and protect the interest of the Ijaw and Niger Delta people and not the selfish and personal interest of a few.”

Jul 31, 2022
ese
E
E
Metro My family and I are with the Ekweremadus" Peter Obi prays for "justice to be done" as he reacts to the arrest of Ike Ekweremadu over alleged organ....