Ikeji Festival: Celebrating The Rich Cultural And Historical Heritage Of The Arondizuogu People

Arondizuogu is a group of sprawling communities, spreading across three local government areas in Imo State, with its largest area located in the land obtained from Umualaoma town. Historically, the people of Arondizuogu were known for their great strength, in terms of warfare and slave trade. As a result of this, they were predominantly migrants. 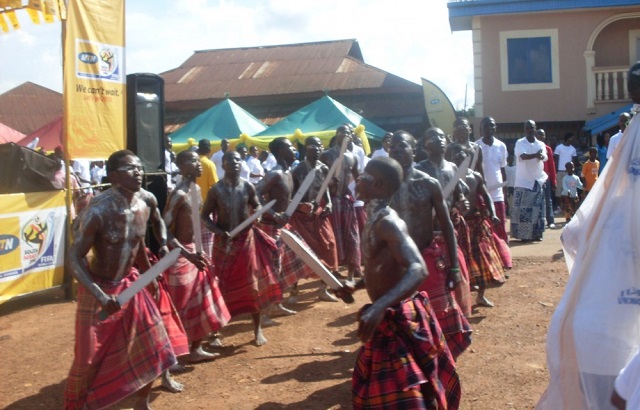 The history of Arondizuogu cannot be complete without highlighting the rich historical background of their great slave trade merchants and warriors. Mazi Izuogu Mgbokpo and Chief Iheme, in the mid 18th century, after the abolition of slave trade, founded the “Arondizuogu.” The former was a powerful slave merchant from Arochukwu; while the latter was Mazi Izuogu’s chief servant, who hailed from Isi-Akpu Nise, in Awka, capital of the present Anambra State. They both decided to kill their hosts in Umualaoma, where they and their soldiers normally rested, when going in search of slaves. This they did and thereafter settled at Okigwe to obstruct their movement.

At this juncture, Iheme and his master, Izuogu, fought the British colonial masters, using slaves, voodoo, as well as war equipment and conquered them. They also founded villages in the present Ideato North and Onuimo Local Government Area in Imo State. Oral history has it that today, many people of the present day Arondizuogu are descendants of people, who faced different types of challenges and persecution and ran from their towns and villages to the present day Abia, Enugu, Imo and Anambra States. They are called the Aro-Uzos, that is, Aro’s in Diaspora.

The Ikeji is an annual festival of thanksgiving, merriment and propitiation, which comes up either in the month of March or April every year. The Ikeji festival is very rich, in both historical and cultural festivities, filled with scintillating performances from masquerades, memorable sights, comic acts and magical dances from different dance groups. The festival began as a ceremony to mark the end of the planting season and the beginning of the harvest season.

The Ikeji festival is a four-market days’ (out-izu uka) festival, which is equivalent to one week in the English calendar. Each of these market days: Eke, Orie, Afor and Nkwo, has its own significance and represents a particular aspect of the Ikeji festival.

The first day is Eke. At each Eke market, farmers and individuals bring the best of their farm produce and livestock to the market and are sold at reduced prices. Orie is the second day, which is set aside for feasting and slaughtering of livestock in advance preparation for subsequent days. On the third day, which is Afor, there is more merriment and display of small masquerades and small dance groups’ performances. Nkwo is the day for the grand finale. This day marks the end of the festival and, as such, it is the most colourful of all the days. On this day, Nnekwu Nmanwu (big masquerade) appears, dressed extravagantly in their most appreciated regalia and costumes, dancing in their unique dance steps.

Nkwo-Achi is everyone’s destination as it is the central venue of the festivities. This colourful day showcases dance groups from different places. Each masquerade moves the great panache, attracting people’s attention in different ways. Whips made from the young malleable branches of palm tree, known as, ‘mgbajara or akpata,’ that are twisted nicely, are used to flog members of the group, to test their strength in withstanding opponents and intruders. They are also used to scare opponents as they use the whip to display fetish-looking acts. Some of the masquerades and their followers are seen carrying water in baskets, which defies the rules of science. The juju contest, which is one side attraction at the event, is a particular spot at the central venue, where the act of ‘ito-ebule’ takes place. Here, a big ram is usually tied to a tree with a tiny rope, which ordinarily, the ram could break loose from but cannot achieve that due to some magical (voodoo) power.

Among the participants or invited guests, someone is summoned to go and untie the ram. This can only be done or achieved by a man with the strongest or most powerful protection from any powerful ‘dibia’ (native doctor). He is expected to walk confidently to the ram and loosen it. As he does this, he is confronted by spiritual attacks from other participants, aimed at knocking him down, preventing him from achieving his aim, or even killing him. At the end of the day, whoever unties the ram wins the juju contest for the year. The winner takes the ram home for feasting.

The children are not left out of the festival as they make small masks and sacks and wear on their bodies and faces to attract visitors and get small money (dash) from them. The ‘Nkwa egwu’ (musical instrument), which accompanies the big masquerades is a sight to behold as the instruments bring out soulful melodies as well as beautiful rhythms of sounds. The ‘Ekwe’ (wooden gongs), ‘ogene’ (large metal gongs), ‘oja’ (wooden flutes), ‘igbirigba’ (bells), and ‘okom’ (drum), and so on, put together sonorous enchanting traditional sounds that encourage the masquerades and dancers to bring out the best in them.

This Ikeji festival, which holds in the ancestral homeland of Arondizuogu, is usually a forum to bring back the sons and daughters of the land from within and in the Diaspora. The festival has survived high measures of antagonism and has come to be accepted as an intangible cultural heritage, worthy of preservation.

The importance of this festival lies in the fact that organizing the festival is vested on the traditional council, which schedules and hands over to the Arondizuogu Patriotic Unions, and in turn, they promote and organize the event.