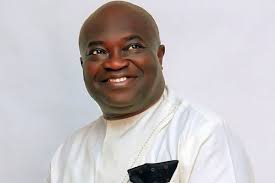 Abia State government has expressed its enthusiasm for the ZUMA Film Festival that is set to take place between the 1st to 5th of December, 2017 in the Federal Capital Territory, Abuja.
Governor Okezie Ikpeazu also commended the efforts of Nigerians in the growth of Nigeria’s film industry and its international appeal.

He made this statement while receiving the Managing Director and Chief Executive Officer of the NFC, Dr. Chidia Maduekwe and the Deputy Director, Rt Honorable Ude Oko Chukwu at the Government House, Umuahia, Abia State.

The governor commended the leadership and management board of the NFC for promoting the direction and progress of the film industry in Nigeria. He also used the opportunity to announce the establishment of a ten million naira (N10,000,000) creative grant that would enable the complete production and filming of a Nigerian movie in Abia State. This, she stated, was to encourage the promotion of the State as a tourist destination in Nigeria.

E
Metro Abia is the only state mentioned in the bible, Coronavirus will pass us by- Governor Okezie Ikpeazu (video) - Linda Ikejis Blog