A Fifteen-year-old Ramandeep Singh in India has died after accidentally shooting himself in the head while taking a selfie.

The teenage was posing with his father's .32 caliber pistol on Friday evening when he accidentally pulled the trigger, according Manoj Kumar, Deputy Superintendent of Police in Pathankot, Punjab state. 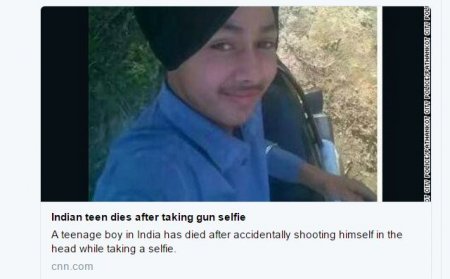 Singh was taken to hospital where he underwent surgery but died of his injuries on Sunday afternoon.

Of 49 fatalities over three years worldwide, India accounted for 19 -- nearly 40% of the global total.

Earlier this year, the spate of deaths prompted authorities in Mumbai to impose no-selfie zones.