Two Arsenal players Mikel Arteta and Mathieu Debuchy have both been ruled out for three months with injuries .

While Arteta underwent an ankle surgery, Debuchy on his part had surgery on his dislocated shoulder, and injury he sustained in Sunday's 3-0 victory over Stoke City.

Arteta had his injury as far back as November last year, but Debuchy just came back from an injury that kept him out for a long time.

"It's unbelievable because he's had two surgeries in the same season. He just came back, he played seven games and he's out again."

Both players will now join a long list of injured Arsenal players that include Jack Wilshere, Kieran Gibbs and Danny Welbeck.

It is left to be seen if this will force Wenger to go into the market and reinforce his team. 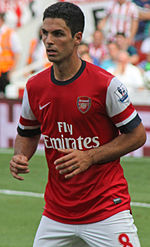 Curators
Arsenal really need to have a good look at their back room team. At this level, if you have players getting injured all the time then questions need to be asked about their well being at the club. Not sure Robin van Persie would have had many games left if he stayed at Arsenal