Sports Is Keshi right to leave out Martins and Ik Uche from the Super Eagles?

Super Eagles coach Stephen Keshi might be ignoring inviting Obafemi Martins and Ikechukwu Uche,but week after week both players prove him wrong with their club performances.

Martins this past weekend broke Seattle Sounders's goalscoring record in Major League Soccer,hitting in two goals in their 4-2 victory over Chivas USA.

He has now scored 15 goals and helping out with 10 assists in 27 league games for Sounders.

Uche on his part has proven what a goalscorer that he is,netting a goal for Villarreal with his first touch in their last Europa league game before he was substituted with an injury.

Now these two players have been in scintillating form for their clubs,but it beggars belief why they are not in the national team.

Keshi last week,expressly said that Martins will not be invited back to the national team.

“For Obafemi Martins, it’s good to indicate interest to play for his country, as a former player of course," Keshi told Brila FM

Keshi's problems with Ik Uche dates back to the 2013 Nations Cup tournament in South Africa,and there has been no looking back between the pair.

But shouldn't national interest be paramount when considering players to be invited?

It was surprisingly when Keshi released his list of players for the forthcoming qualifiers against Sudan and the duo of Uche and Martins were still not handed an invite.

Players from the Norwegian,Austrian and even Chinese leagues were called up to the national team for this all important clash.

Most people have been questioning the caliber of players called up to play for Nigeria,while proven players are being left out.

“I don’t know what the coach thinks, but the way I see it, we keep experimenting. I don’t know when we will stop experimenting with players because I believe that if your team isn’t working, you change your style but it seems like he wants to hold the country to ransom," former Super Eagles player Garba Lawal said on the players Keshi invites to the team.

At the moment,Emmanuel Emenike seems to be the only quality striker in the team,and he himself has been firing blanks of late,maybe he needs some help.

Yes a coach should have his own choice of players,but everybody can't be wrong clamouring for the return of both Uche and Martins to the national team. 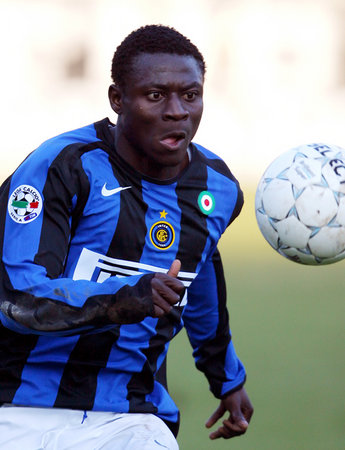 Honestly....with respect to Obafemi Martins..... it is indeed a "NO BRAINER" ....the man has for all intents and purposes regarding playing and scoring since last season been "on fire"... considering FORM{physique,speed, power,stamina, match fitness}, CONSISTENCY {CLUB LEVEL & LEAGUE INTENSITY, TECHNICALITY AND QUALITY} scoring confidence and PATRIOTISM... OBAFEMI "OBA GOAL" should be let BACK IN to the SE ....
IK UCHE i admire forever for his speed, technical skill and guile....has been in and out of purple patches goal scoring wise, nonetheless he IS on form....HOWEVER...
IF HE DID INTENTIONALLY DELIVER "STINKERS" as performance in defiance to S Keshi's battle plans during the 2013 AFCON in a bid to scuttle him/Nigeria then by extension... IK UCHE, MAKE UNRESERVED COMPLETE AND UTTERLY HUMBLE PUBLIC APOLOGIES to NIGERIA and S Keshi....IF YOU ARE PATRIOTIC ENOUGH....
further Balogun, 'Shone Aluko,Ezekiel Imoh, Nwofor, Ogude,Uchebo all need to be retried extensively in these competitive matches..

Kelechi Iheanacho, Yaya, and Awoniyi + the 2 CENTRE BACKS during their victorious run at World U17 SHOULD ALL BE BLOODED INTO SE NOW !!!

Off late Nigerian strikers have been firing blanks on international duty,certainly the Super Eagles needs the likes of Uche and Martins to help out. It is a Nations Cup qualifiers at stake and Keshi can't afford to bottle it with rookies. Like they say: "new broom sweeps clean but an old broom knows the corners of the house." Uche and Martins understands what it means to travel to difficult terrains like Omdurman and Brazzaville,so Keshi ought to give them a chance.

....."retire... young grow " based on YOUR say-so i presume.... I'm afraid it doesn't work quite like that....if Pirlo, Totti, Milla, Stoichkov, Figo, etc. etc.... could do exploits for their countries on the world's greatest stages alongside their youngsters and emerging talents then if a person is still showing capability to perform to a high standard continuously and consistently then he merits his place and should be given every opportunity to do his heart's desire for his homeland.....

Chris Maduewesi said:
Off late Nigerian strikers have been firing blanks on international duty,certainly the Super Eagles needs the likes of Uche and Martins to help out. It is a Nations Cup qualifiers at stake and Keshi can't afford to bottle it with rookies. Like they say: "new broom sweeps clean but an old broom knows the corners of the house." Uche and Martins understands what it means to travel to difficult terrains like Omdurman and Brazzaville,so Keshi ought to give them a chance.
Click to expand...

Well stated friend... and that's another reason..... They'll be able to pass on valuable knowledge and experience to upcoming talents and the youngsters.....
L

@OUSCA2007 and @Chris Maduewesi Don't be surprised if Martins plays for the SE and starts shooting blanks. The SE is different from a football club

then you should address the SUPPLY chain..... all of us who have and STILL play some football know one fact, a footballer does not wake up one day "skill dead" ....Martins in the form he is, cannot just fail to perform on the national front just for the sake of it... but when you have some players with vested interests of any sort or reason supplying "hospital" passes or "BANCE" run balls (passes requiring extraordinary speed, stamina and extension to reach and use) forcing the said player to overwork for what eventually pans out as half chances, arriving at an overworked players disposal then the output will be eventually futile, i have witnessed this while i was back home in Nigeria, seen it done in EUROPEAN LEAGUE CLUBS (incl EPL) ....supply awful passes to someone you don't want to shine get him taken off or frustrated then start sending telegraphed or hospital passes, finally giving the odd good pass when the fellow is drained to make him look really stupid... Only to give other players very nice assists to score on tap.......
L

Then Keshi should work on his attackers and midfielders. If they don't like the strikers to supply 'em good passes so they can score then Nigeria probably won't win any matches.

A good striker is one who converts almost all of his clear cut goal chances. If Emenike isn't getting CCGC and doesn't score, I don't know how Martins can score in the same situation.