Curators
Real Madrid forward, Cristiano Ronaldo, has said he never imagined he would become the first player, to score 100 goals in European competitions. 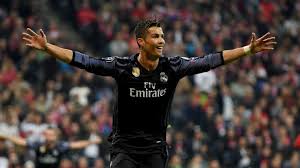 The 32-year-old reached the milestone, after netting twice as Madrid fought back to defeat Bayern Munich 2-1 on Wednesday night in the Champions League.

Ronaldo was presented with a commemorative shirt by Madrid president, Florentino Perez on Thursday.

He then told the club’s official website: “It’s a great honour to reach 100 goals in Europe. Yesterday was a special day, with a very important win.

“I’m very happy. I want to thank Real Madrid for the opportunity to build a wonderful career at this club, and to my teammates as well.

“Many thanks to the club, my teammates and the fans.”

Ronaldo first goal in European competitions, came while he was at Manchester United, when he scored in a 3-0 over Debrecen in August 2005.