Curators
Arsenal’s Alex Iwobi scored a brace, as the Super Eagles defeated Plateau United 3-0 on Wednesday evening, in a test game in preparation for Sunday’s 2018 World Cup qualifier against Zambia in Ndola. 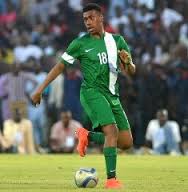 It was Anderson Esiti who plays for Gent in Belgium, that opened scoring in the 36th minute, following a fine solo run.

The 20-year-old, who has been in fine form for the Gunners, fired in his second on the stroke of full time.

Plateau United, who finished 11th in the just concluded Nigeria Professional Football League (NPFL) season, played more as a team, but did not have the cutting edge to overpower Gernot Rohr’s men.

Rohr left out some of the more senior players in the first half of the match, which was played at the Abuja National Stadium, but eventually introduced them after the break.

The Nigerian team were expected to fly out of the country on Saturday for the clash against the Chipolopolo.