A jealous hairdresser, Terri Marie Palmer, 23, has reportedly stabbed her boyfriend to death after losing her temper with him for spending too much time on Facebook.

She wrote on her Facebook wall how much Damon Searson pissed her off sitting on Facebook, completely blanking her when she's talking to him.

Moments later, she snapped and plunged a bread knife deep into his heart while he checked his messages online.

She then rang 999 and claimed the unemployed 24-year-old had accidentally stabbed himself while they were 'messing around' in the caravan they shared in Heysham, Lancashire.

According to DailyMail, on the night of the killing on August 13, Palmer began moaning to a pal via Facebook that Searson was once again browsing the social network, adding friends.

She claimed she paid the rent while he spent money on a mobile phone and shopping, insisting she was planing to leave him and move back in with her mother.

In her post, Palmer said: 'All he does is sits there and adds loads of girls. He's a silly little prick. I'm fuming with him.' 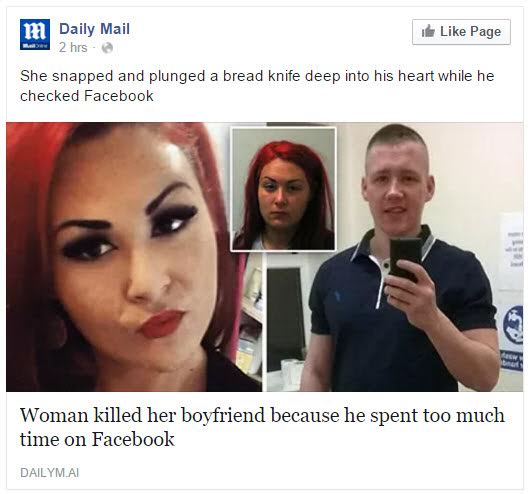 Just after midnight, a neighbour at the caravan park heard the couple rowing before Palmer knocked on his door in a state of distress.

Searson was found lying on the floor, bleeding heavily from a wound to his chest. On the settee was a bread knife, covered in blood.

He was taken to Lancaster Royal Infirmary where he died later.

When Palmer was told by police her boyfriend had died, she said: 'I didn't mean for it to get him.'

A 999 call made by Palmer was played to the jury, in which she said Searson had asked her to throw the carving knife to him and it went in to his chest.