Entertainment Jide Kosoko - I Regret Being a Polygamist 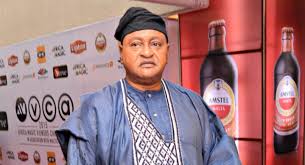 Explaining how he became a polygamist, the actor told Saturday beats, “If I have to be frank, I regret being a polygamist. I must confess. I did not really plan it and it was designed beyond my power because I never planned to marry so many wives. I first married one wife but she was not part of the job I was doing and in those days, you needed a very trustworthy assistant. That pushed me to marrying the second wife. I stayed with them until I lost them both eleven months apart in the same scenario – childbirth.”

He added that he initially thought he wouldn’t marry again but, “A doctor of mine advised against it. He said I was still young and needed to take a wife. I looked at the situation critically and realised that a lot of my friends were coming to my apartment with their girlfriends and I saw myself as becoming irresponsible and my house was a free house. Some of those of my friends were married yet they still brought their girlfriends to my house. I felt if I had a wife, all that would not happen so I tried to get another wife. I was romancing two women with the mind of settling down with one. But eventually, the two entered. That was how I became a polygamist.

If most guys are having so much trouble with one woman, marrying two or more women is dangerous to ur life o..
There are things that seem right to man but the end is catastrophe .
so u married four wives and u came to tell us how you hated polygamy...No be u who wan taste egbusi,okro,bitterleaf and white soup...Y u come dey regret am?

Oct 17, 2021
Kayode Israel
K
K
Entertainment “Jide Kosoko Made A Public Threat To My Life. I Hope He Is Ready For What He Started?”- Nkechi Blessing Sunday – Tori News