Manchester United player Juan Mata has apologised to the club's fans for the manner they lost their Premier League game on Sunday.

Despite looking like they were going to win,United threw away a two-goal lead and ended up losing 5-3 to Leicester City.

And Mata who played a role in the defeat after giving away the ball that led to the fourth goal for Leicester,acknowledged that they bottled the game.

"After a whole week waiting for the match I could not imagine a Sunday like this," Mata wrote on his weekly blog.

"The way back from Leicester to Manchester on the bus seemed really long.

"I keep thinking about how we lost a game that was under control.

"It's really tough to score three goals away and come back home with no points.

"On our way back to Manchester I was thinking about what had happened and felt so disappointed as all those that came with us to the stadium.

"Honestly, I feel very sorry that the weekend ended up for our fans in such a sad way" he said. 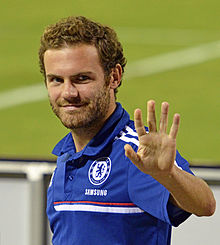 E
Sports Famous ‘Can You Believe It’ Moments in Soccer