Hospitals in England are facing major disruption as junior doctors have gone on strike in a dispute with the government over a new contract and may order striking junior doctors back to work on Tuesday amid spiralling pressure on patient services as medics walked out across England for the first time in 40 years.

The doctors are providing emergency cover only during the 24-hour walkout, which got under way at 08:00 GMT, BBC reports

The NHS has so far postponed 4,000 routine treatments - about one in 10 planned - including knee and hip ops.

A West Midlands hospital has also asked doctors to come off the picket line to help after a surge in patients. 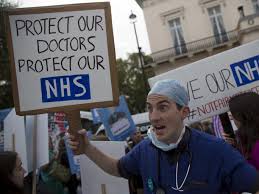 Bosses at Sandwell raised the alarm shortly after the strike got under way, saying beds were filling up and they were struggling to discharge patients.

But the British Medical Association has so far refused to agree to the request, arguing it is not clear whether it qualifies as a major incident.

The walkout comes after talks between the union and government failed to reach agreement on the contract. The BMA is concerned about pay for weekend working, career progression and safeguards to protect doctors from being overworked.

But ministers have argued the current arrangements are outdated and changes needed to improve standards of care at the weekend.