Curators
The seven Kano State students and their driver who died along Lagos-Ibadan expressway were on Thursday buried in Kano, amid tears, the News Agency of Nigeria (NAN) reports.

READ:Body of Pupils who Died in Ibadan Road Accident Flown to Kano [PHOTOS]

The funeral prayer was conducted at the Emir’s Palace, Kano, around 9 a.m., and the deceased were buried at the Tarauni Graveyard. 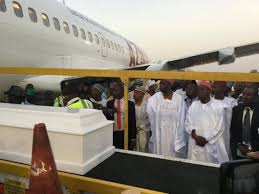 Among those that attended the prayer are: Gov. Abdullahi Ganduje, members of the state Executive Council, other top government officials as well as parents and sympathisers.

The funeral prayer was led by the Chief Imam of Kano, Prof. Sani Zahraddeen, who prayed God to grant the souls of the departed eternal rest and Jannatul Firdaus (The highest Paradise).

He also prayed God to give their families the fortitude to bear the irreparable loss.

Jun 6, 2018
mrsam
M
M
Metro Atiku Reacts To The Death Of 22 Students Who Crashed On Their Way For Excursion - Nairaland