Curators
The Harambee Stars of Kenya have been shown the exit door from next year’s Africa Youth Championship qualifiers for fielding ineligible players against Sudan. 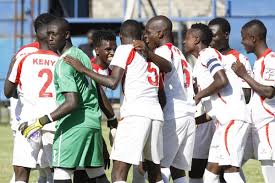 The decision follows a protest by Sudan on some players of Kenya during the first round first leg on Sunday, 3 April 2016 at the El Merreikh Stadium, which ended 1-1.

Erick Ouma Otien, Nicholas Kipkirui, Boniface Muchiri, Eugene Moses Mukangula and Theodore Kibet Kilele were all born in 1996 and are not qualified to participate in the competition reserved for players born on or after 1 January 1997, as stated in a circular sent to all national associations by the competition's organising committee.

“The Organizing Committee after its findings concluded that the Football Kenya Federation (FKF) clearly violated article 40.11 of the competition regulations which states: ‘a team which allows a non-qualified or a suspended player to take part in a direct knock-out match shall lose the match and shall be eliminated from the competition, even in the absence of protests’.

Nov 18, 2017
Jamaz
J
E
Sports The Development Of Hockey Sports In Nigeria, The Issues And The Solution