Alhaji Yahaya Bello of the All Progressives Congress and winner of the Kogi governorship election was Wednesday afternoon sworn in as the executive governor of the state amid tears of mixed feelings.

Bello who emerged victorious after a run-off was conducted following the death of Prince Abubakar who was earlier picked as the party’s flagbearer in an inconclusive election, took his oath of office at the Lokoja New stadium. 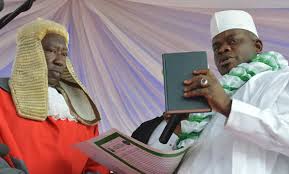 Here are 5 promises he made during his inaugural speech:

- I hereby declare that the Yahaya Bello administration will not tolerate corruption, I'll live by example

- I'm a governor for all and will pay outstanding salaries immediately, security of a great priority for Kogi State

- The Yahaya Bello administration will have no tolerance for corruption

- Bello commended the late Prince Abubakar Audu, maintaining that his administration would immortalize him for his good work as a politician.

Curators
Does he belong to anyone, no-one or everyone