Politics Kogi: Yahaya Bello To Be Sworn In As Governor Tomorrow

Alhaji Yahaya Adoza Bello will tomorrow, at the Confluence Stadium, Lokoja, the state capital, be sworn-in as Governor of Kogi State.

Two motions for the interlocutory injunction to stop the inauguration were thrown out by the Kogi State governorship Election Petition Tribunal sitting in Lokoja.

Meanwhile, there are indications that Mr. Gowon Egbunu may emerge as deputy governor to Bello. 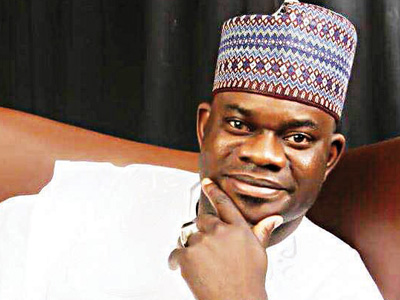 Guardian learnt that Egbunu who hails from the Eastern Senatorial district of the state was unanimously nominated as the preferred deputy governorship candidate by key stakeholders of the party in the Kogi East Senatorial zone.

A statement signed by Chairman, Media/ Publicity Committee for the Inauguration Isiaq Ajibola and made available to The Guardian in Lokoja yesterday said President Muhammadu Buhari, Vice President Yemi Osibanjo and Senate President Bukolá Saraki are expected to grace the inauguration along with members of the national and state assemblies, governors, ministers and captains of industry.