Five factory workers were on Tuesday docked at an Ikeja Chief Magistrates’ Court for allegedly stealing their employer’s hides and skin (pomo) valued at N2.8 million.

Others are Richard Daniel, 36, and Micheal Adejo, 23, both workers at Rainbow Network Ltd, Lagos.

The prosecutor, Insp. Clifford Ogu told the court that the accused committed the offence sometime between November 2015 and Feb. 6 at No. 1, Kosemani St., Iju Ishaga, a Lagos suburb.

Ogu said the accused committed the offence while working as staff of Rainbow Network Ltd which specialises in the production of hides and skin (Pomo).

“The manager of the company, Mr Gbenga Ayodele, discovered that some sacks of `pomo’ valued at N2.8 million were missing from the warehouse. 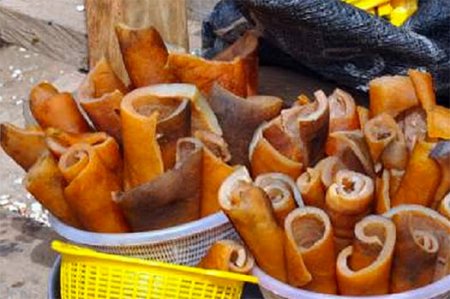 As a result of this, the company sacked Thomas, the security guard on duty the day the theft was committed.’’

The News Agency of Nigeria (NAN) reports that the offence contravened Section 285 which prescribes a three-year jail term for stealing, while Section 404 provides seven years imprisonment.

The accused pleaded not guilty.

In her ruling, the Chief Magistrate, Mrs Taiwo Akanni, granted the five factory workers bail in the sum of N250, 000 each with two sureties each in like sum.

She adjourned the case to March 9 for mention.
M

I guess the ponmos are made from Dinosaur skins...