Lagos State Governor, Akinwumi Ambode on Wednesday presented cheques of N150m to Yobe, Borno and Adamawa states as a token to support them take care of those affected by Boko Haram insurgents in their states.

The Governor who also condemned the activities of the insurgents while presenting the three cheques of N50 million each to the officials of the State governments. 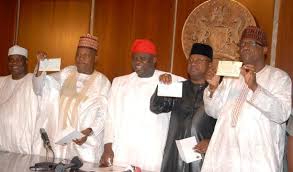 Ambode assured them that they were not alone in their current plights, as the prayers pf all Nigerians is to see an end to the menace and also ensures that the displaced persons will return to their normal lives soon.

He also commended the Federal Government for its ongoing efforts towards bringing the insurgents to an end.

Responding on behalf of the states, the Governor of Borno State, Mr Kashim Shettima, thanked Governor Ambode for the gesture and promised to channel the money to the people of the state who were in dire need of it.

He also expressed appreciation for the brotherly role Lagos State had continued to play all over the country, especially to the north-east and states affected by the insurgency.