Not less than 31 persons have died in a ghastly motor accident that occurred along the Lagos-Ibadan expressway around 8.30pm on Thursday.

The accident, which occurred around Elelubo area in Oluyole local council of Oyo State, involved two 18-passenger buses. One was said to be coming from Lagos while the other departed from Ibadan garage. 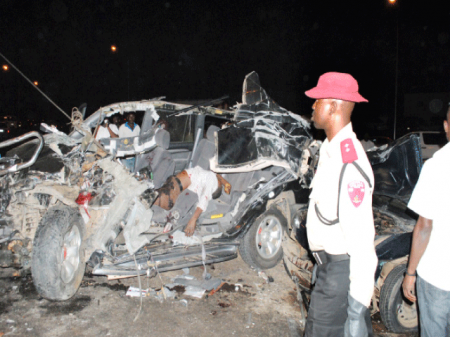 The Federal Road Safety Commission (FRSC) Sector Commander, Cyril Mathew, who addressed newsmen said the bus coming from Lagos was over speeding in an attempt to overtake a trailer but lost control and was unable to return to his normal lane before the collision.

He said the bus ran through a construction site that was incompletely blocked and in the process rammed into the Lagos bound bus.

He disclosed that that the injured had been taken to the Ibadan Central Hospital, Imalefalafia, while the remains of the deceased victims had been deposited at the Adeoyo State Hospital morgue on Ring Road, Ibadan.

He gave the details of the 30 casualties to include, 20 males and 10 females, who are all adults.