Shock struck on the lawyers on Tuesday at the Igbosere Magistrate’s Court in Lagos after a lawyer simply identified as Chidi, allegedly slumped while asking for a change in the adjourned date, PUNCH reports.

On his arrival in court after the case had been adjourned till April 14, the lawyer reportedly apologised to the court for arriving late, explaining that he was held in traffic.

The lawyer’s clients as reported by PUNCH Newspaper were Okedairo Okedeji, 38, and Akolade Agbola, 28, who were arraigned on February 29 for allegedly stealing meat and snail worth N28,000 from Southern Sun Hotel in Ikoyi, Lagos. 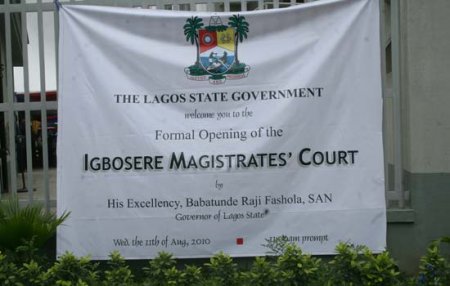 A police prosecutor said, “While pleading with the magistrate for a change in the adjourned date because it was not convenient for him, he started coughing uncontrollably and gasping for breath.”

According to the prosecutor, the lawyer shouted “‘Obim!’ ‘Obim!’ (My chest, my chest!) as he was rushed outside the courtroom.”

Another prosecutor was quoted to have said, “He was rushed downstairs by one of his clients, who tried to get a cab that would take him to a hospital. But he died before the cab arrived.”