Manchester United kicked off their UEFA champions league campaign with a disappointing 2-1 defeat to PSV Eindoven on Tuesday night.

The Louis Van Gaal's men, who returned to European football after missing last season's edition of the championship opened scoring through Memphis Depay in the first half of the game.

Fed by Daley Blind, United’s no.7 shrugged off Arias and skipped past a second defender before beating Zoet with an emphatic finish. It was a tremendous goal by the 21-year-old and he almost scored a second from a similar angle in the very next attack, a three-on-three break led by Juan Mata and comprising Martial too, but this time his shot whistled the wrong side of the far post.

The Red Devils gave up their 1-0 lead before half time when Lestienne’s corner was met with conviction by Moreno and his downward header was inadvertently diverted beyond De Gea by Blind to make the half-time score 1-1.

Luciano Narsingh added insult to their injury after doubling the home-side's lead in the 57th minute, and take the three points in the game.

Upon losing the game, they also lost Luke Shaw to injury while the first half was going on. 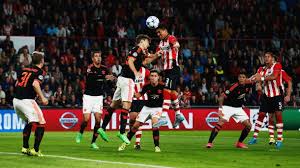