Lung Cancer: 9 Factors That Can Put Your Life At Risk

Lung cancer begins in the lungs. Like all cancers, Lung cancer results from an abnormality in the cell. Normally, the body maintains a system of checks and balances on cell growth so that cells divide to produce new cells only when new cells are needed. Disruption of this system of checks and balances on cell growth results in an uncontrolled division and proliferation of cells that eventually forms a mass known as a tumor. Lung cancer claims more lives each year than do colon, prostate, ovarian and breast cancers combined. A number of factors may increase your risk of lung cancer. Below is a list of some of them. 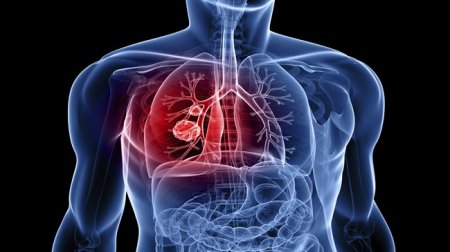 1. Exposure to Asbestos and Certain Substances: A number of substances that occur in the workplace may cause lung cancer. In particular, these include asbestos, silica, and diesel exhaust. But asbestos is still a cause of lung cancer because cancers take so long to develop. And smokers are at even higher risk.

2. Air Pollution: Air pollution, from vehicles, industry, and power plants, can raise the likelihood of developing lung cancer. Up to 1% of lung cancer deaths are attributable to breathing polluted air, and experts believe that prolonged exposure to highly polluted air can carry a risk similar to that of passive smoking for the development of lung cancer.

3. Prior Lung Disease: Having had a disease that caused scarring in the lungs may be a risk factor for a type of lung cancer called adenocarcinoma of the lung. Tuberculosis (TB) can make scar tissue form in the lungs. People who have had TB have double the risk of lung cancer. This risk continues for more than 20 years.

Chlamydia pneumoniae is a type of bacteria that can cause chest infections. Some studies have shown that people with antibodies to chlamydia pneumoniae have an increased risk of lung cancer. The risk is greater for people who smoke.

4. Family History of Lung Cancer: Genetics may predispose certain people to lung cancer. Individuals with an immediate family member who has or had lung cancer (and who does not or did not smoke) may be more prone to developing the disease.

6. Previous Related Cancers: People who have had a head and neck cancer, oesophageal cancer or cervical cancer have an increased risk of lung cancer. This may be explained by the fact that the risk of these cancers is higher in smokers. But it could also be a result of radiotherapy treatment.

7. Lowered immunity: HIV and AIDS lower immunity and so do drugs that people take after organ transplants. An overview of research studies shows that people with HIV or AIDS have a risk of lung cancer that is 3 times higher than people who do not have HIV or AIDS. People who take drugs to suppress their immunity after an organ transplant have double the usual risk of lung cancer.

8. Passive Smoking: Passive smoking, or the inhalation of tobacco smoke from other smokers sharing living or working quarters, is also an established risk factor for the development of lung cancer. Research has shown that non-smokers who reside with a smoker have a 24% increase in risk for developing lung cancer when compared with other non-smokers.

9. Age: About two out of three lung cancers are diagnosed in people over age 65, and most people are older than 45. The average age at diagnosis is 71.

------
It is important to remember that having no treatment for these cancers is a much greater risk to your health than the slight increase in risk from treatment. It is most important to get the treatment you need at the time. In some of the research done, lung cancer risk seems to be increased even more in smokers, so if you have had radiotherapy to your chest it is very important not to smoke. And contact your doctor for proper medical attention.

PS: This information put together as a guide are culled from health-related articles on websites, journals, and videos.

General Health The Major Breast Cancer Risk Factor That Isn’t Being Talked About—But Should Be – Health.com