Metro Magu Gets Endorsement From 25 Countries

The acting Chairman of the Economic and Financial Crimes Commission (EFCC), Mr Ibrahim Magu, has received an endorsement from outside the country as 25 countries around the world have applauded his work in fighting corruption in Nigeria.

This endorsement is coming when the Nigerian Senate refused to confirm his appointment on two occasions.

It is the outcome of an opinion poll conducted by United Kingdom -based Global Peace Movement International.

The outcome of the poll is coming a week after the Transparency International (TI) released its latest transparency index in which Nigeria, for the first time in over a decade, moved up in the global anti corruption and transparency ranking.

This development, analysts insist, is directly related to the efforts of the EFCC to tackle corruption headlong and change the negative perception of the country.

Speaking on the poll, the President General of the UK- based Global Peace Movement International, Dr Mike Uyi, explained that the decision to conduct the poll was based on the need to conduct an international survey to ascertain global opinion on the work of the EFCC, pointing out that Magu secured more than 96 per cent endorsement by respondents, with the United States of America, the United Kingdom, France, Germany, Russia, Canada, China and Belgium all commending the work of the EFCC in tackling graft. 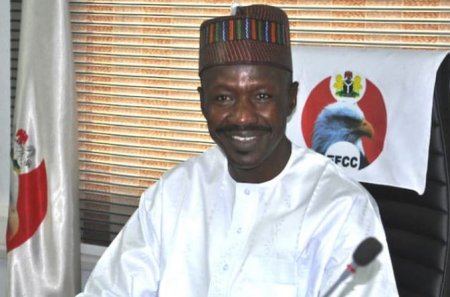