Curators
Police in Singapore have arrested a maid accused of scalding a toddler’s hand by dipping it repeatedly into a boiling pot.

This comes a week after the alleged incident was caught on video by the 16-month-old girl’s mother, Amy Low Mei Liang, who last night posted the clip online with her allegations.

She indicated that the 45-second surveillance footage was filmed in her Buangkok kitchen while she and her husband were at work. She also posted photos of what appear to be the toddler’s scalded and burned hands.

“I felt something was amissed [sic] and I decided to check the CCTV footage at home while waiting for the maid to be picked up. And what I saw was horrifying. The maid, she did it on purpose! It was never an accident! She took my daughter’s hand and dipped her hand inside a boiling pot. I was shaking throughout and made a police report immediately,” Low wrote. 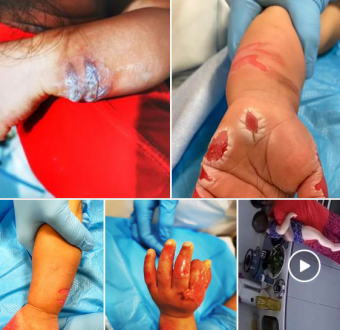 E
Metro Boy tied to ceiling by his parents, pepper poured on his face (photos) - LIB

Oct 7, 2019
ese
E
E
Entertainment Bobrisky brags of his achievements as he shares his before and now photos - LIB