My Oladimeji Isiaka, a businessman who lives in Sango Ota area of Ogun State, has gone bankrupt after losing about N25m to suspected fraudsters who defrauded him under the pretext of curing his headache.

According to Punch, Isiaka sold his house and five cars to raise the money

He however petitioned the Zone 2 Police Command, Onikan Lagos State after realizing he had been defrauded.

Investigations by operatives of the command led to the arrest of five members of the syndicate at their base in Ibadan, Oyo State.

A police source who spoke with newsmen said Isiaka is an in-law of Ottun and had sought his counsel sometime in October 2016 when he had the headache, which defied medications.

“The man was into oil business. He called Alasela (Ottun), for help. The in-law called Yetunde (Mustapha) to pray for him. From there, she passed information about his case to her boyfriend and they started demanding money from him to cure his headache, which they said was a spiritual attack.

“They eventually collected N25m from him. The man sold all his property, including five vehicles and a building. He also lost his business and became bankrupt. When they knew that the game was up, they threatened to kill him if he told anyone. The man wrote a petition, which the police followed up, and they were arrested.”

The source explained that 45-year-old Ottun, after defrauding the victim of a few millions of naira, passed him to Mustapha, who pretended to be a white witch with answers to all his problems.

Ottun, an indigene of Iwo, Osun State, said he collected only N180,000 from Isiaka, adding that he called Mustapha to pray for him on the telephone without knowing that she had stored his number for ulterior motives.

“The man is my wife’s brother. He knew I was into herbal medicine and he called me for solution to his headache. I did some medicine for him, which didn’t work, so I called Yetunde (Mustapha) to pray for him on the telephone.

“I never knew she had stored his number. I suspected something was wrong after I didn’t hear from my in-law for about three months. I also went to Yetunde’s house, but she had packed out. I never knew she had given the number to her boyfriend and they had been collecting money from him.”

The Zone 2 Police Public Relations Officer, SP Dolapo Badmos, said the suspects would be arraigned at the end of investigations.

“We recovered charms, fake currencies and fetish objects from their shrines. The Assistant Inspector-General of Police, Adamu Ibrahim, has ordered that they should be arraigned in court,” she said. 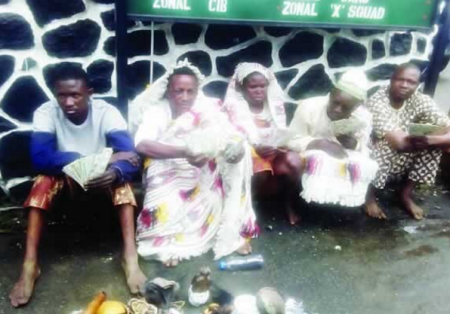 Jul 27, 2021
ese
E
E
Metro Lady tackles man for failing to buy her the phone he promised her before they had sex (video) - Linda Ikejis blog