Arsenal are waiting to know how long they will be without their defender Mathieu Debuchy,but manager Arsene Wenger has confirmed that it could be up to six weeks.

The French right-back was stretchered off in Arsenal's 2-2 draw last weekend against Manchester City.

Arsenal are currently struggling to have fit defenders,with no capable replacements for Per Mertesacker and Laurent Koscienly should any of the pair be ruled out.

"He has an exploration of his ankle on Friday night and they go in and look how the ligament is damaged, and after that we know if he does need surgery," said Wenger.

"If he doesn't, it'll be six weeks; if he does need surgery, it'll be three months. At the moment we don't know." 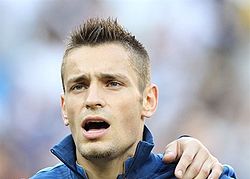 Politics The Way Out: A Clarion Call For Coalition For Nigerian Movement - Olusegun Obasanjo