Michelle Obama gave her final White House remarks in an emotional speech Friday, thanking her supporters and saying, "being your first lady has been the greatest honour of my life and I hope I've made you proud."

"I want our young people to know that they matter, that they belong," Obama said, her voice breaking several times near the end of her remarks. "So don't be afraid. You hear me, young people? Don't be afraid. Be focused. Be determined. Be hopeful. Be empowered. Empower yourself with a good education. Then get out there and use that education to build a country worthy of you boundless promise. Lead by example with hope; never fear." 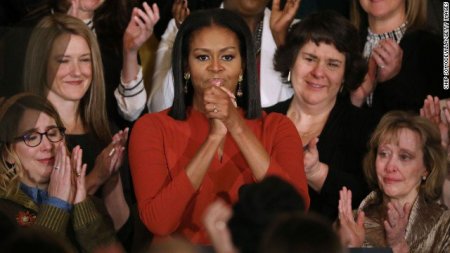 I love this woman
P

Jules said:
I love this woman
Click to expand...

She is an inspiration to millions
E

This is the message, the world needs right now.

World Melania Trump’s spokeswoman explains why the first lady never has reached out to Michelle Obama for advice – Pulse.ng