Dominic Iorfa has refused to acknowledge being defeated by Amaju Pinnick at the general elections of the Nigeria Football Federation(NFF) adding that he bought the elections with money.

Pinnick yesterday was declared winner of the NFF elections after two rounds of voting,beating the likes of Iorfa and Taiwo Ogunjobi to be declared winner.

Iorfa caused a stir prior to the elections when he produced a list where Pinnick had already been declared winner even before the voting had commenced.

He further said that he only lost the elections because Pinnick bought the elections with money,adding that he wouldn't have lost in a free and fair election.

“I’ll never embrace him. He is not better than me. He did not beat me. Money won and not him,"Iorfa said yesterday after the elections,when asked why he didn't congratulate Pinnick.

"People sold their souls for money and you want me to embrace and hug him? I don’t pretend. I’ll never embrace him”, Iorfa added. 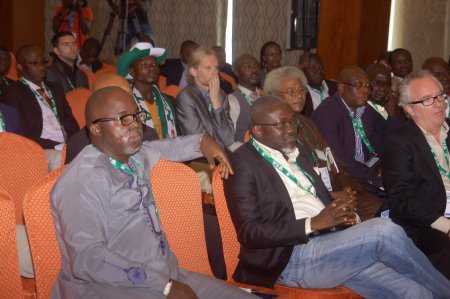 E
Sports NFF ELECTIONS:Meet the 14 men who could take over from Amaju Pinnick in September

Sports Jude Ighalo Has Not Reversed His Decision To Retire – Nairaland

Sports Nigeria’s Pinnick is next in line to run African football; can he clean it up? – The Africa Report