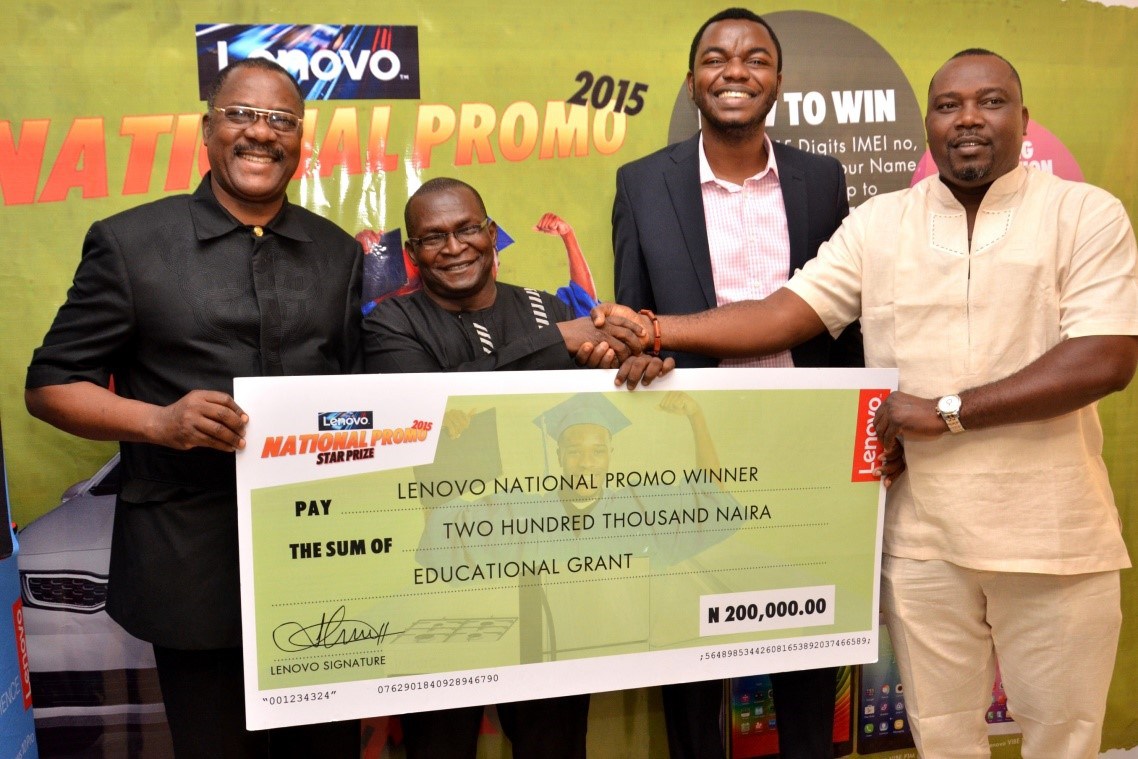 Six more lucky winners have emerged in the third draw of the Lenovo National promo. The winners; Magdalene Okwuwe, Bode Afolayan, Ikekwuku, Morismo Harry, Kehinde Jinadu and Emmanuel were announced at an event which held in Lagos on Friday, February 5, 2016.

These six customers all won grand prizes of education grants worth N200,000. The event also saw other customers win consolation prizes including blenders, deep freezer, smartphones, refrigerators and much more.

This third promo draw marks the last event for the award of Lenovo’s educational grants to winners and brings the total number of grant winners to 10. A final draw for the presentation of the Kia Rio grand prize will hold on Saturday, February 13, 2016 at Slot Limited’s retail outlet in Ajah, Lagos. Customers also stand the chance of winning consolation prizes at the event.

The Lenovo National Promo comes on the heels of the company’s announcement of the availability of its Vibe P1m smartphone in Nigeria. The Lenovo Vibe P1m boasts a long-lasting 4000mAh battery, a Quick Charge feature and energy saving software alongside a splash-proof Nano coating that protects it from rain and spills. It also features a 2GB RAM, 16GB ROM, Expandable Memory up to 64GB, manual power saver switch that instantly extends battery life as well as an OTG (On-The-Go) charging support that enables it charge other USB-connected devices such as Bluetooth headsets and portable speakers.

The Lenovo National Promo was launched in December 2015 with the aim of rewarding the tech giant’s customers for their loyalty as well as making the past yuletide season more exciting. All anyone had to do to enter for the promo was, buy any Lenovo smartphone from accredited dealers nationwide towards standing the chance of winning star prizes including 10 Educational grants worth N200,000 each and a brand new Kia Rio Car. Registration for the promo ended on January 31, 2016.