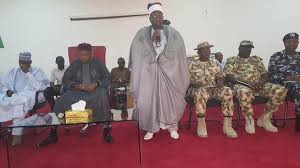 Governor Kashim Shettima alongside Heads of the Army, Police and Department of State Security and the Shehu of Borno, ‎Abubakar Ibn Umar Garbai Elkanemi on Sunday held a closed door meeting with Imams of mosques in Maiduguri, Jere and surrounding areas as well as district heads (Aja) and ward heads (Lawans) for a crucial security discussions that aimed at developing fresh strategies to prevent recent tricks deployed by Boko Haram insurgents who attack worshippers at pre-dawn prayers at mosques in Maiduguri.

The meeting was held at the multi purpose hall of the Government House, Maiduguri at the instance of Governor Shettima and facilitated by the Shehu of Borno, the spiritual and traditional head of the State. The General Officer Commanding the 7th Division of the Nigerian Army in Maiduguri, the Police Commissioner and the Director of the DSS were in attendance along with other senior officers of security agencies.