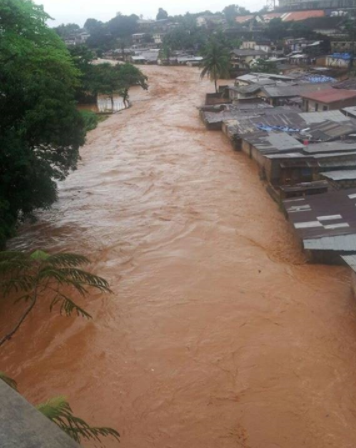 The president made the announcement on Tuesday over the recent mudslide in the country that caused huge loss of lives and massive devastation on the outskirts of the capital city – Freetown.


According to a statement from the Office of the President, the national mourning will start from August 16 to Aug 22, during which period all flags would be flown at half mast.

The general public is also requested to observe a minute of silence at 12 midday on Wednesday, the statement said.

The statement reads: “The President has further decided to invoke MAC-C (Military Aid to Civil Community) and to raise the national security threat level to level 3 in direct response to the unfolding emergency situation.

“Bereaved families are requested to continue to identify their fallen loved ones at the Connaught Hospital Mortuary between 9 am and 5 pm Wednesday at the mortuary where they will be advised on the burial procedure.

“Unidentified corpses will be given dignified burial at Waterloo between Aug 17 and Aug 18.

“The government will continue to provide the public with regular updates on the situation.”