Curators
The Economic and Financial Crimes Commission has frozen the bank account of a company belonging to a former Secretary to the Government of the Federation, Chief Olu Falae. 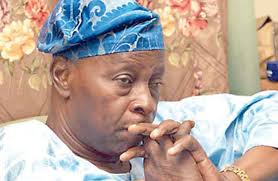 It was gathered that the account with one of the commercial banks was frozen as part of the ongoing investigations into the N4bn disbursed by the Goodluck Jonathan Campaign Organisation during the build-up to the 2015 presidential election.

The money was said to have emanated from the account of the National Security Adviser, which

Falae was accused of receiving N100m from the Director of Finance of the campaign organisation, Senator Nenadi Usman, during the build-up to the 2015 presidential election.

Meanwhile, Falae said he never knew that the money received was government’s account.

Falae had said, “It is true that N100m was given to my party to endorse and work for Jonathan candidacy in the 2015 presidential election.

“We used the money for that purpose and we effectively campaigned for the PDP since we did not have a presidential candidate in the election. The money was not for me.