Senator Buruji Kashamu, representing Ogun East Senatorial District, has raised the alarm over alleged plans by the National Drugs Law Enforcement Agency (NDLEA) to kidnap and repatriate him to the United States of America on alleged drugs offences.

Lawyer to the Senator, Ajibola Oluyede, disclosed this in a petition he filed before the Senate Ethics, Privileges and Public Petition Committee, disclosing that his client got wind of the plan through appropriate quarters. 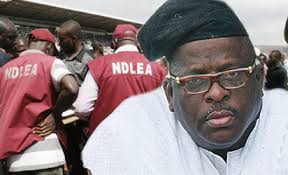 Oluyede told Senate that the plan had reached an advance stage to abduct the Senator, a reason he had sought the attention of the Senate.

The senate on the strength of the petition, however, ordered the National Drug Law Enforcement Agency (NDLEA), to stop any further harassment of Senator Buruji Kashamu over alleged drug related offence committed in the United States of America.

P
Politics We Are Working To Arrest, Extradite Kashamu – NDLEA