Curators
The leadership of the new pro Biafra group, the Reformed Indigenous People of Biafra, IPOB, has named a new leader for the organization and listed eminent personalities who are expected to dialogue with the Nigerian government over the agitation for an independent state of Biafra. 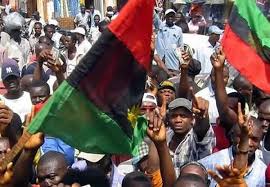 In a statement signed by its National Director of Publicity, Ikemba Biafra, RE-IPOB described the new leader, Jonathan Kurubo who hails from Bayelsa state as a true son of Biafra who believes in the cause and dignity of the marginalized people of the old Eastern region.

While calling on the people of Biafra living in the old Eastern region and in Diaspora, to support the new leader, RE-IPOB unveiled a list of eminent personalities and elders of Biafra who are expected to lead its negotiation with the Nigerian government.

The group urged security agents to stop molesting or killing members of RE-IPOB as its security arm,Ogbunigwe, has been set up to protect Biafra people.