The Nigeria Football Federation has responded to the sudden resignation of Super Eagles coach, Sunday Oliseh.

The spokesperson for the Federation, Ademola Olajire, described the development as ‘good riddance to bad rubbish’, saying with Oliseh’s departure, the country would have to immediately get a new set of technical leadership for the national team. 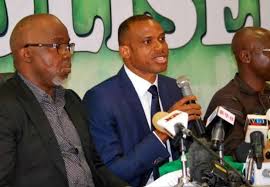 “Oliseh is gone and we have to move forward,” Olajire said in an interview in Abuja with the Nigeria Television Authority.

The NFF spokesperson said he has discussed with the President of the NFF, Amaju Pinnick, and other top officials of the Federation, who are currently in Zurich for FIFA special congress about the matter .