One of the leaders of the Movement for the Actualization of Sovereign States of Biafra, MASSOB, Chief Solomon Chukwu, has denied the claims in some quarters that the people of the Niger Delta area abandoned Ndigbo during the Nigerian Civil war.

According to Chukwu, Niger Deltans had been strongly behind them before, during and after the war. 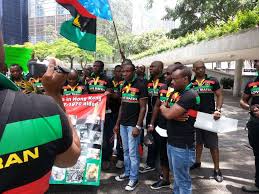 Speaking with Vanguard, Chukwu said; “During the war, people said the Niger Delta denied Biafra. It is not true; the major betrayers of Biafra were even from the South East than the South South bloc. People like Ojukwu’s second in command, Gen. Philip Effiong, fought for Biafra till the end.

“My father and many strong men of Niger Delta also fought for Biafra. I’m a Biafran from Ikwerre extraction in Obio/Akpor Local Government Area of Rivers State.

“I’m a true son of Niger Delta. Forget about the role of people like Ken Saro Wiwa, but in the mainstream of Biafra, many Niger Deltans stood to be counted. Today, they still support Biafra. Now, Asari Dokubo, Kalada George, Uche Okwukwu, among other great Niger Delta sons are in support of Biafra.