A plane belonging to the Nigerian army on Friday crashed at the Yola International Airport.

According to LEADERSHIP, the crashed plane was on a mission to convey injured soldiers from Yola to Kaduna State for treatment before the unfortunate incident.

No casualty was reported after the crash as the pilot and other crew members escaped unhurt.

The incident reportedly delayed landing and take-off of other airplanes as some of them had to be diverted to other airports. 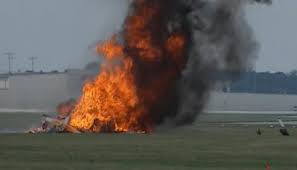