On Thursday, a helicopter belonging to the Nigerian Army, on Thursday, crashed in outskirts of Girei, Adamawa state .

CHANNELS TV reported that residents said two helicopters were hovering around town in anticipation of any possible attack from the dreaded Boko Haram members who were dislodged from Mubi town when one suddenly crashed, leaving the other hovering around the crash site.

So far there has been no official confirmation on the crash. 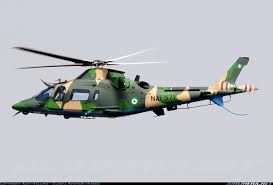