Politics Nigeria: See LIST of Most Traveled State Governors Since May 2015

State governors are still spending billions of naira from public funds on foreign trips in the name of seeking foreign investors, despite the cash crunch facing their states.

Some of them, whom are still owing up-to 3 to 5 months workers' salaries expended state funds on junketing around the whole in search of foreign investors.

Daily Trust investigations showed that about 25 governors have travelled abroad at an average of 10 times in the quest for investors since May 29 when they came to office.

The governors, usually with large entourage that include close aides and family members, spend fortune from their cash-strapped treasuries on first class airlines tickets, luxury hotels, estacodes, among others. 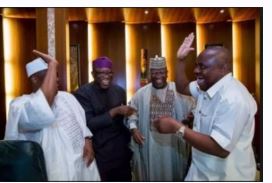 Among the most traveled governors are:

Rochas Okorocha (Imo) - China and Turkey twice; Ireland and Kosovo once and China thrice from May 2015 to date.

Simon Lalong - Plateau - 6 foreign trips to Brazil, Israel, China, Dubai so far but all without any official announcement to that effect.

Abiola Ajimobi Oyo state - United States of America, United Kingdom, China, Canada, Lebanon and many other countries of the world within the last one year.

Business Current List Of Most Corrupt Countries In The World. Ghana Has Overthrown Nigeria – Nairaland