Members of the Organisation of Petroleum Exporting Countries (OPEC) on Friday met in Vienna for talks about a possible freeze on production.

Ahead of the meeting, Iranian representatives said the country had no plans to limit oil output.

However, further details were to be clarified in preparation for the decisive meeting of OPEC oil ministers at the end of November.

OPEC members are hoping that a freeze or significant reduction in oil production will stabilise plummeting oil prices.

Recall that Sanusi Barkindo, secretary-general of the Organisation of Petroleum Exporting Countries (OPEC), during the G-24 meeting at the IMF Headquarters, Barkindo had said that Nigeria, Iran and Libya will get special treatment in the cartel’s oil ceiling deal.

He said the ceiling would be a big relief to the Central Bank of Nigeria. 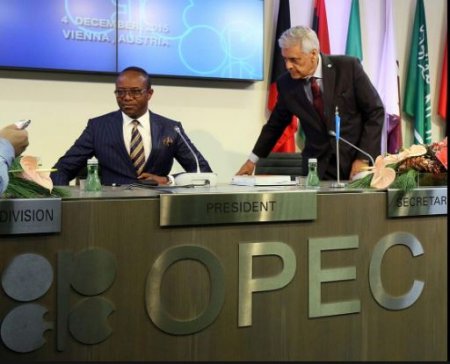 The member countries said in September that they would reduce production to between 32.5 and 33 million barrels per day, but the decision requires final approval from oil ministers.

On Saturday, important non-OPEC oil-producing countries like Russia will join the talks.

Russia has discussed a freeze on oil production for months, while President Vladimir Putin has confirmed that Moscow will agree to the proposal if the OPEC countries can reach a consensus.

Report says the fall in oil prices has intensified the economic crisis in Russia.