Metro NIGERIA: What I Found Out In Sambisa Forest - Ezekwesili Reveals Tour Findings

The Bring Back Our Girls (BBOG) which comprised of the convener of the group, Dr Obiageli Ezekwesili, the spokesperson of the Chibok community, Dr Manasseh Allen, Aisha Yusuf and Ibrahim Usman have revealed findings from the Sambisa forest trip.

The BBOG group said that the trip has afforded them the opportunity to validate their demand that no military dis-empowered can win the war on terror.

Recall that The BBOG joined the Federal Government’s team on a day search sorties for missing Chibok girls to Sambisa Forest on Monday after back and forth emails with the Minister of Information, Alhaji Lai Mohammed.

The former Minister of Education and Foremost campaigner for the BringBackOurGirls team took to her twitter to revealed details about the trip.

TRENDING: PHOTOS Of Ezekwesili, Lai Mohammed, Others On Tour To Sambisa Forest

She said the capture of Camp Zero in Sambisa is akin to capturing the Capital City of a country, “Camp Zero was the Capital SPOT of Boko Haram in Sambisa”

She wrote: “Capture of Camp Zero is significant but not cos of its SIZE. It is SIGNIFICANT because it USED TO BE the STRONGHOLD of the enemy in there”.

See some of her tweets: 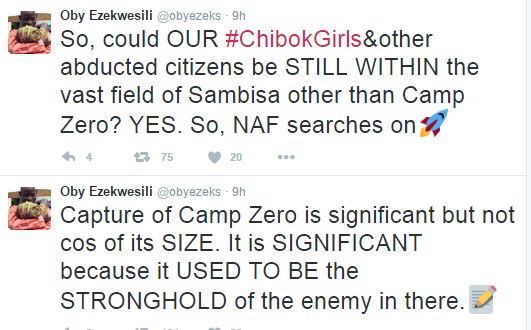 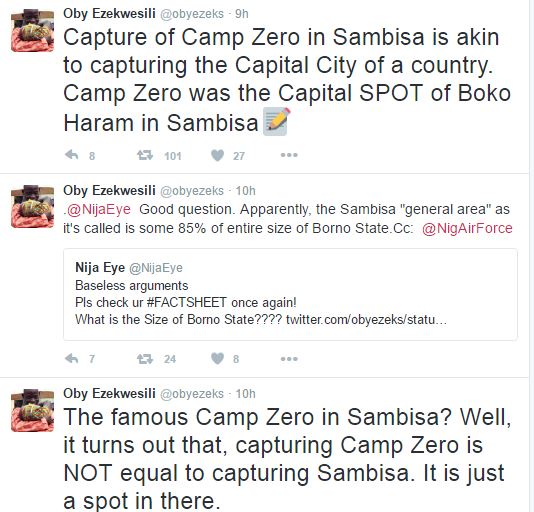 M
Metro As You Enjoy Christmas, Pray For Us Suffering In Sambisa Forest - Soldier Urges Nigerians