A Nigerian man was removed from a plane by armed police at Luton airport after a fellow passenger read a message on his mobile phone about “prayer” and reported him as a security threat.

Devout Christian, Laolu Opebiyi, 40, from London, said he was forced to hand over his phone and supply his password in order to establish his innocence after he tried to arrange a conference call prayer with friends using WhatsApp.

A fellow passenger had been spying on his phone from over his shoulder and may have misread the title of the group 'Isi men' as 'Isis men', he says.

His accuser then asked him: 'What do you mean by "prayer?"' before walking towards the cockpit and asking to get off. In the minutes that followed another six passengers also left the plane 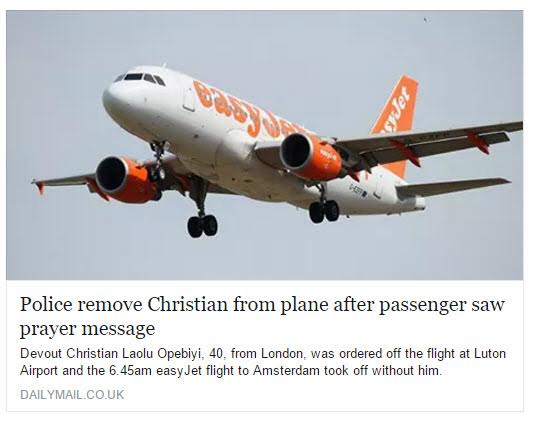 The police then released him but he was further shamed because as he returned to the easyJet desk to get to Holland the seven passengers refused to travel with him.

One said: 'If he is on the next flight, I am not getting on the flight.'

He eventually travelled to Amsterdam on the 10.25am flight - four hours after he was originally due to fly.

Mr Opebiyi now fears he is on a terror watchlist because he was stopped by officials as he travelled back from Amsterdam the following day. His passport also failed to work at the electronic departure gates. 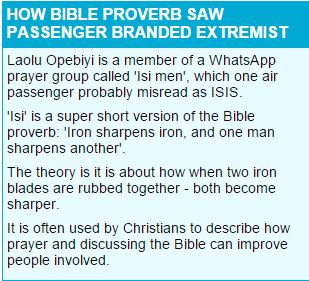