The Nigerian Navy has paraded eight suspected oil pipeline vandals at the base headquarters in Warri, Delta State.

The group was arrested by men of the Nigerian Navy Ship (NNS) Delta during a special naval operations in the Niger Delta region.

The Base Operations Officer of NNS Delta, Shehu Tasir, disclosed this to Channels Television during the exercise. 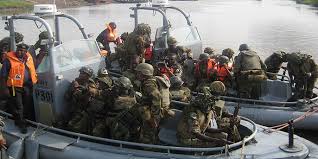 He revealed that one of the suspects whose gang members remain at large was apprehended with a speed boat containing explosives.

The naval officer added that all suspects have since been handed over to the Warri Area Command of the Nigeria Police for further investigation and prosecution.