Two men were arrested at the den at an abandoned Ayokunnu Filling Station, a few metres from the Iyana-Ilogbo bus stop on the Lagos/Abeokuta Express Road.

Found by the police and an inquisitive crowd that descended on the scene soon after the news of the discovery broke were what looked like the remains of a male victim, clothes, shoes, wigs, a matchete and bags.

The suspects’ names were given as Babatunde Taofeek and Hammed Hassan. 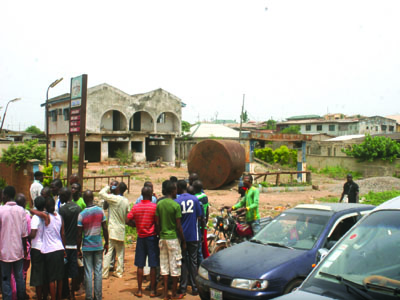 Other members of the ritual gang were said to have escaped.

Police Public Relations Officer, Olumuyiwa Adejobi, who confirmed the incident, said the den was discovered at about 7am, and that the Divisional Police Officer in charge of Sango Division and men of the Anti-Robbery Squadý acted swiftly and arrested two suspects.

Adejobi said the suspects were found at the scene in possession of the lifeless body of a man believed to have been killed by their gang.